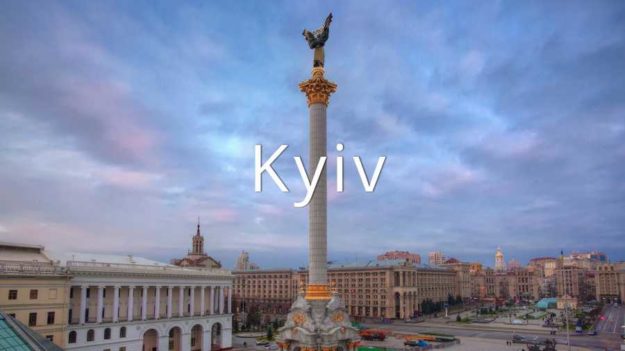 Kyiv not Kiev: officials and activists have long called on international media outlets to drop the Soviet-era “Kiev” spelling and adopt the official Ukrainian spelling of the country’s capital city

British newspaper The Guardian has changed its editorial style guide and will now spell the Ukrainian capital “Kyiv” instead of “Kiev”.

The change is a small but sweet victory for the many Ukrainian officials and activists who have long lobbied international media outlets to stop using the Soviet era “Kiev” and adopt the official post-independence “Kyiv” spelling, which reflects the name of the city in the Ukrainian language.

Ukraine itself made the switch to “Kyiv” in the early years of independence and most governments have since adopted the official Ukrainian spelling. However, the persistent use of “Kiev” by much of the English-language international media has remained a source of irritation in Ukraine.

It is not clear exactly why The Guardian has now chosen to change its policy regarding the spelling of Ukrainian place names, but a recent social media push to promote the use of “Kyiv” may have been a contributing factor.

Critics of the “Kiev” spelling have traditionally rejected it as a Russian language version of the city’s name and therefore an unwelcome relic of tsarist and Soviet imperialism. They argue that unlike traditional Anglicized versions of European place names such as Munich (Munchen) and Rome (Roma), the spelling of the Ukrainian capital has political implications, making the change from “Kiev” to “Kyiv” more akin to the move from “Bombay” to “Mumbai”.