16-19 May, 2019 Ancient Kiev (in the park called the Principality of Kievan Rus) will see a remarkable world scale event long awaited by both Ukrainians and tourists within the program of the Medieval Battle Festival. For the first time in history Ukraine will host the World Championship in Medieval Combat which will gather more than 1,000 fighters from 40 countries around the world. The fighters will compete for the world title in the fierce fights and incredibly spectacular battles.

The world championship in medieval combat is the largest sports event of 2019 in Ukraine. After the medieval combat was officially recognized as a sport and the world-famous victory of Ukrainian team in Barcelona, the medieval battle has gained incredible popularity. Tourists come from all over the world to cheer for their national team. And finally, the Ukrainians have gained the opportunity to support their athletes without going abroad. 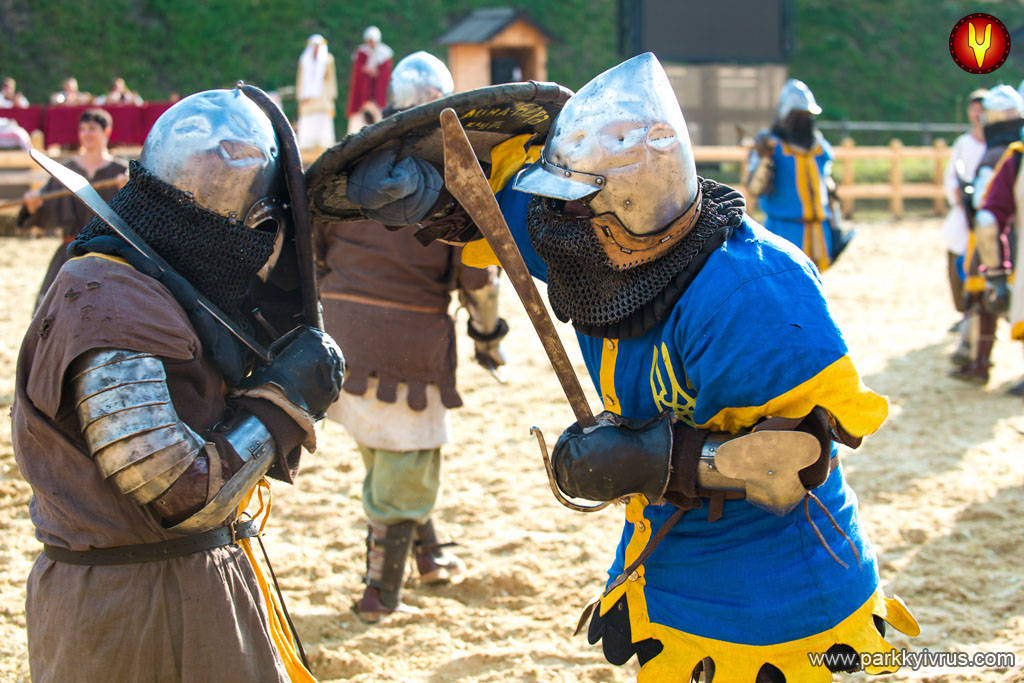 Athletes will put on heavy knightly armor and show their prowess in full contact battles with real medieval weapons made according to historical patterns. For four days you will be seeing single and group fights, and even women’s fights. These are not staged battles, everything is for real here!

Apart from the program, the visitors will be able to feel the charm of the ancient Kiev, because it is here that you can see the real medieval city of the 10th century in its full size. Guests will have the opportunity to feel like a resident of the Early Middle Ages, enjoy delicious meals on an open fire, ride horses and carriages, visit museums, fly on the cableway called “Poletailo” and “Zmey Gorynych” speed hill, shoot archery and crossbow, mint an ancient Kiev coin , disguise as a resident of Ancient Kiev in a princely dressing room, make a piece of pottery, unwind by the Forest Lake, attend various workshops and a fair of craftsmen. Children aged 2 to 12 will be able to have fun in the rope cube-maze called “Mousetrap”. 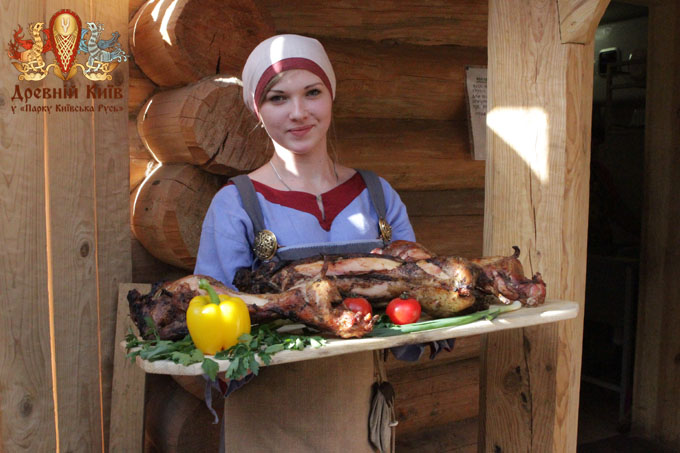 Between the fights guests can appreciate various kinds of entertainment, for instance, horse shows, flash mobs and workshops in medieval dance, or drawing a bowl of gifts. In the evening shots from trebuchet with fiery cannon balls will give you a real surprise and delight, on top of that, there is also an enchanting fire show on Saturday. After that the guests will be invited to the Forest Lake for a musical and entertainment program that will last until late. 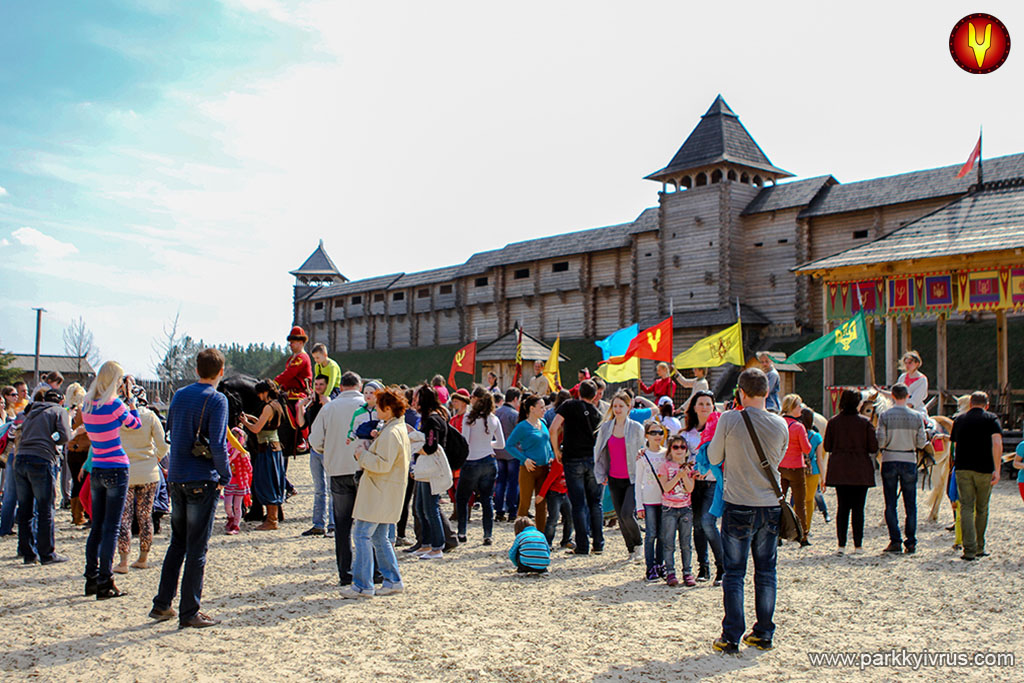 On Sunday, you will see the most captivating part of the festival – the ceremony of giving awards to the winners.
An exciting rope descent “Poletailo” on which everyone can not only descend from the height, but also fly over the lake will make the visitors feel a surge of adrenalin.

Rest by the lake in the breathtaking scenery
If you want to find a truly unique place near the water, the lake of the Principality “Kievan Rus” is exactly what you are looking for!
Forest Lake of Ancient Kiev is open every day. Choosing the best beaches near Kiev, you not only get the opportunity to relax near the water, but also enjoy the medieval surroundings of the complex and the picturesque nature away from the noisy metropolis.
Certainly, you will be able to taste delicious dishes from the princely cooks in the Princely Inn and in the open-air catering and gazebos. 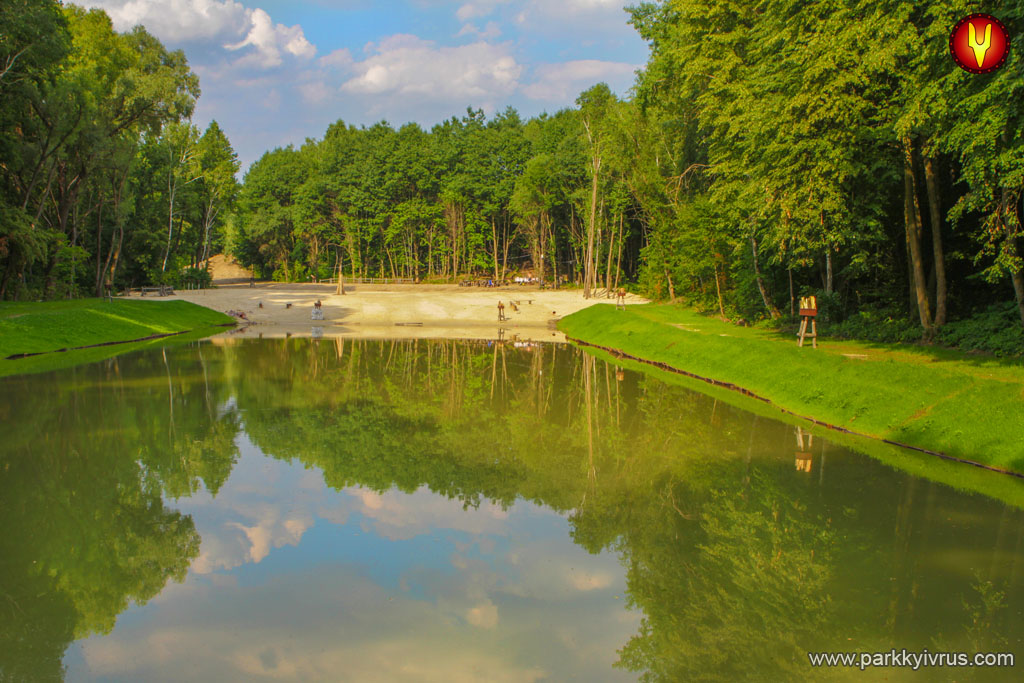 You can also stay overnight in a 4-room hotel-type house, which is 5 minute walk from Dytynets district of Kiev, in a hostel, in unique rooms decorated in medieval style, or in the park camping.
*Tents can be brought with you or rented in Ancient Kiev (campers can also use the shower). Book accommodation by phone. + 38050-385-20-35.

Gather a big company, because together it is more fun! Come take pictures and be sure to share your impressions and photos in the social networks.

In Principalty of Kievan Rus guests can also find at their disposal:
– Princely stables where you can ride a horse
– Medieval shooting range, where you can shoot a bow or throw knives at a target
– Mint, where you can mint the coin “for luck”
– Exhibition of shipbuilding, where you can see the world’s only reconstruction of the boat of Kievan Rus (which also took part in a scientific expedition);
– Torture chamber, where you can take pictures in the debt pit or at the shackles
– Forest lake for outdoor recreation
– Shop of souvenirs, gifts and amulets of Kievan Rus.